About two weeks ago, LinkedIn announced a change to its algorithm. The new format is tailored around a user’s LinkedIn Feed. Content will now be ranked around personal interests and engagement. Rather than heavily listing viral content, users will now see content in which they are more likely to join the conversation.

According to the Search Engine Journal, the algorithm determines who a user knows by looking at the following signals:

The LinkedIn Feed may also surface posts from members a user is not connected too if they’re relevant to the user’s professional interests.

Social Media Today explains that LinkedIn was motivated to change its algorithm after finding that its engagement metrics were primarily weighted towards the top users on the platform, and disproportionately saw those with fewer followers get, for the most part, ignored.

With the latest change, LinkedIn is now rewarding content creators on the platform, as opposed to showing users the most engaging content to maximize response. This is determined by groups, hashtags, connections, and pages users follow.

LinkedIn states that there are many ways you can signal what you’re interested in: the most obvious is joining groups, and following hashtags, people, and pages. Along with posts from your connections, you’ll also see these posts in your feed. If a connection uses a hashtag, you also happen to follow; it gets an extra boost!

LinkedIn adds that posts can appear in your feed because you’re connected to, or follow, the person or page that posted it. Or because a connection liked, commented, or shared someone else’s post. You may also see posts from groups you’ve joined, hashtags that you follow, and events you’re attending. Again, all to show you the content and conversations that you care about.

Just be careful you don’t engage with the LinkedIn spammers.

Which one of those posts is original? @LinkedIn you can also play this game 🙂 #LinkedIn 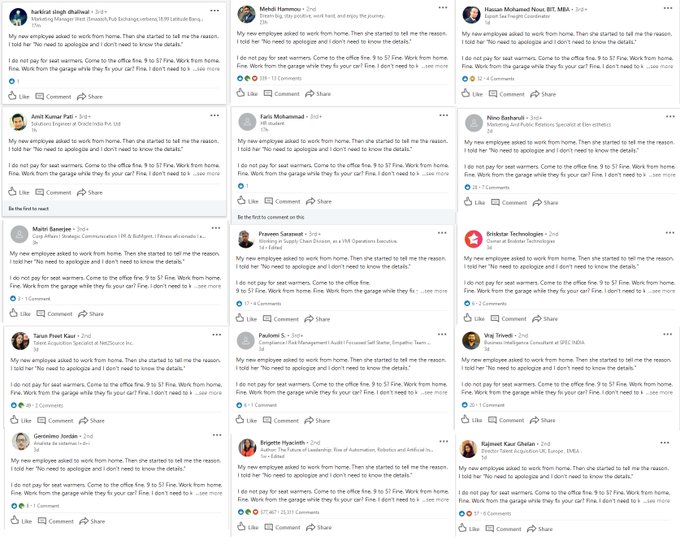